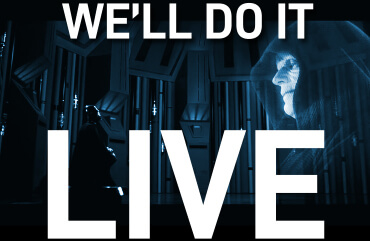 I got a little internet history trivia for you.

Who was the first band to live stream on the internet?

A.  The Rolling Stones
B.  Metallica
C.  Severe Tire Damage

If you guessed “C”, you’re correct! Congratulations you’ve officially snagged the award for “biggest internet nerd”. Put that on your Linkedin.

Nearly 30 years ago, this obscure party band made up of computer tech wizards from Apple and Xerox would make history by performing the first live stream ever on the internet.

A year later, The Rolling Stones would become the second band ever to perform a live show on the internet – inviting Severe Tire Damage to be their opening band.

Though the stream was definitely crude by today’s standard (the resolution was the size of a postage stamp), how we use the internet was forever changed.

Today, live streaming technologies are able to take the quality of broadcast television and add the interactivity of the internet.

FDM is currently working with a client to move a sizable annual conference entirely online. Instead of using a meeting platform like Zoom, we’re partnering with Liquid Creative to produce a live stream that will be much higher quality, much more controlled, and much more engaging for attendees.

We spoke with Ryan Pratzel, CEO of Liquid Creative, who has been producing live streams for more than a decade. He gave us some insights into how businesses are currently using live streaming technologies, the benefits, and some unexpected uses of the technology.

Check it out below.

Why use a live stream?

It’s great when you need to reach a distributed audience. You can reach that audience all at the same time in real-time.

The audience is there to absorb the information you’re sending out there. It’s perfect for all-hands meetings, trainings, presentations, if you have an organizational message you need to get out.

You can have it be a little more produced [as opposed to a web meeting].

You can set up what you want it to be. It can be very relaxed and low key, talk radio style, it can be much more produced with roll-in videos, slide presentations, all of that stuff.

It can be branded.

If an organization wants to continue to have control over their messaging but wants to do something that is kind of in the moment and hit a large audience, that’s where live streaming comes in handy.

Organizations are going to have to start to come around to it because that’s going to be one of the best ways to communicate.

At the end of the day that’s what we do. We’re here to tell stories we’re here to help our clients communicate and get their message out and live streaming right now is going to be the way to do it.

Are you seeing more people/industries turning to live streaming as a solution?

Yes. We are streaming every single day right now. 2 months ago, we were doing 2 – 3 streams a month.

Now we’re streaming basically every day. We’re seeing a ton of pivoting towards it because organizations are looking for a way to continue their messaging and their communication.

You have to communicate with whoever your audience is. Whether that’s customers or that’s other businesses that you interact with. You have to let them know what is going on, and live streaming is a great way to do it.

What are the benefits of recording with live streaming software as opposed to using Zoom or Google Hangouts?

Webex, Google Hangouts, Zoom are meeting platforms. Different people can come into the meeting, share screens, webcams, etc. That is not how a live stream works.

What’s different about this vs a live meeting is we tend to be sending things out at a higher definition. It tends to be a little bit better video quality.

At the end of the day, Zoom or Google is using whoever’s webcam is coming to you. When we use our software during a live stream, it is pulling their camera in.

If it’s an HD camera, it will pull in the full resolution of their camera and it pulls it in at a higher data rate.

If their camera is 720 or 1080 resolution, we’re pulling it in at that resolution.

Whereas just using Zoom or Google by itself, in our experience, the audio and video quality is not as good. They work as meeting platforms, but the quality of a recording is of a much lower data rate.

Also when you live stream you have total control over the message. You don’t have to worry about a viewer coming into a live stream and forgetting to mute their microphone. Streaming lets you manage the content.

What are some non-obvious ways industries can use live streaming?

We work with an animal welfare group in the DC area and the way they operate is by adopting out animals. Right now they can’t hold those in-person adoption events which is how they stay in business.

They had to find another way to function. We approached them with the idea to take their adoption events virtual.

So, twice a week for the past 3 weeks we’ve been live streaming 30-minute virtual [adoption] events.

They’re averaging 3500 people per event and are adopting out record numbers of animals right now which has been unexpected.

What do you think the future of live streaming is?

Where we are today is leaps and bounds ahead of where we started. I think the quality of the live stream will continue to push up, but it’s also going to get more interactive. With the live streaming tech we have now we have features like audience polling, and ask a question features.

Things like that have not traditionally been a part of live streaming are now starting to come in.

We can integrate social media feeds so if you have a twitter handle or even a #, we can pull a feed of that into a live stream in real-time and I think you’re going to see more of that interaction.

The quality just keeps getting better and I think that’s one of the biggest arguments for streaming.

For example, one of the things clients have told us is, ‘wow the video quality of this is so much better than when I do my Webex meeting’.

There are technical reasons under the hood as to why that’s happening but video streaming platforms are designed for higher data rates, higher bit rates, things like that.

At FDM, we are adding value to live streams by pre-producing content, designing custom graphics, animations, and branding, as well as downloadable videos that attendees can take home at the end of the meeting. Interested in live streaming?

Give us a call to discuss how we can help produce your next event.